This year, Innovate France attended the 116th exhibition of Concours Lépine International Paris giving them the chance to support over 600 inventors and exhibitions from across the globe.

What is Concours Lépine?

Concours Lépine is a French competition, welcoming over 600 inventors and 1,000,000 visitors worldwide. The competition provides an amazing opportunity to meet passionate inventors and learn about their fascinating inventions.

This year Innovate France accompanied one of their clients to the competition – Anne-Sophie Calloc’h with her invention Rodol’f le Rouleau (a multifunctional roller). In fact, it was here that Anne-Sophie Calloc’h received a prototype that Innovate had made for her. Furthermore, she had her own stand to present her product and even had the opportunity to talk about her product on live television!

Innovate had a visit from Pascal the co-founder of O2CHAIR – the world’s first breathing chair. 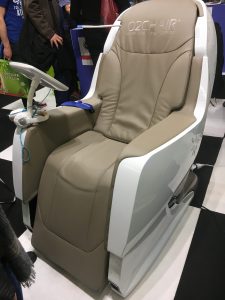 The O2CHAIR is equipped with a patented mechanism which encourages optimal breathing by guiding you through the two inspiration-expiration phases. It works by exerting a force on your back from the abdomen up to the collarbone.

In today’s society, some would suggest that people are experiencing more and more stress. Therefore, this chair has great potential in rest areas at work, airports, and spas. In fact, one individual from our french team went to test it! She said “besides the comfort of the seat, the patented mechanism used to assist breathing  was very pleasant. The hardest thing was getting out and getting back on my stool!” 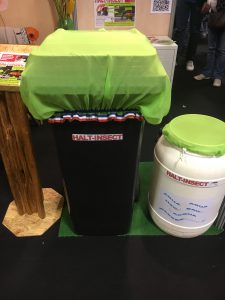 Halt-Insect is an aesthetic and ingenious fabric covered with an insecticide. This fabric is used to cover the lid of the trash bin which prevents any contamination caused by insects. Pests can settle or develop in your trash bins causing major hygiene problems!

Do you need help with your idea?

If you would like Innovate to help with your new product idea, submit your idea via our online submission form.