Home  >  News  >  The latest innovation to hit the world of bicycle locks is the Skylock Smart Bike Lock.

The functionality of this invention is an evolutionary step in the way bike locks have been developed in the past. The Skylock Smart Bike Lock connects with a user’s smart phone via an app. This allows a raft of functions that you just don’t get from a regular bike lock. 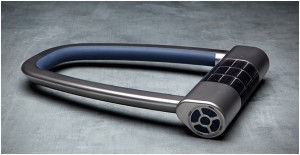 Another useful option you get with the app is having a warning sent to you if someone tries to tamper with your bike. It also has an accelerometer built in. This means that if you are riding and have an accident the lock will ask you if you are okay! If you don’t respond it will contact an ambulance for you, very useful if you have been incapacitated.

All of this innovation is powered by a built in solar panel that charges the device whenever it is exposed to sunlight. This is a far cry from the type of functionality you could expect from a bike lock 40 years ago.

An example of a classic design from the world of bike locks is the Kryptonite Lock. This lock was first developed in 1972, taking the form of a u-lock. It was a no frills locking solution that went about protecting the padlock mechanism in a hardened shell from bolt cutters. The patent was applied for in 1972 and was granted in 1974.

It was a successful and iconic design that has led to Kryponite being one of the most recognisable names in the world of bike protection.

The introduction of this new breed of bike locks, embodied in the Skylock could spell the end of the traditional bike lock, so it will be interesting to see how the likes of Kryptonite react to its arrival. 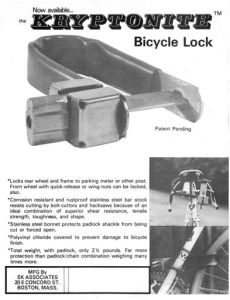